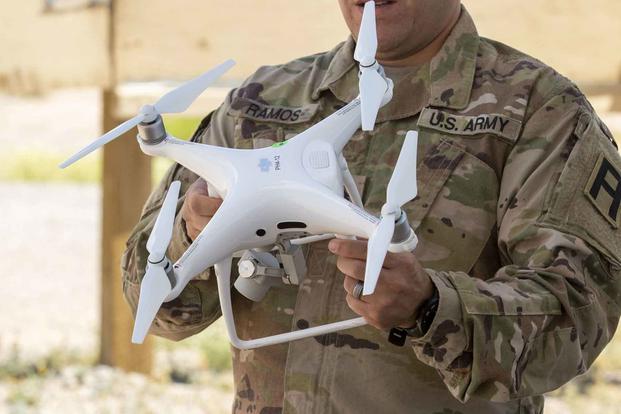 U.S. needs to defend service members against IEDs that fly

Tiny Drones Are the Biggest Threat in the Middle East Since IEDs, Top General Says

This story by Gina Harkins was originally published Feb. 8, 2021 on Military.com.  Read it here.


State and nonstate actors have figured out another cheap way to target U.S. troops, a four-star general warned this week.

Small drones anyone can “go out and buy at Costco right now” pose the most concerning tactical development since the rise of the improvised explosive device in Iraq and Afghanistan, Marine Gen. Kenneth McKenzie Jr., the head of U.S. Central Command, said Monday.

“These systems are inexpensive, easy to modify and weaponize, and easy to proliferate,” McKenzie said during a virtual event hosted by the Middle East Institute.

The U.S. has systems that can defend against large unmanned aircraft, he added, but organized militaries and terror groups in the region are making use of much smaller and cheaper off-the-shelf drones. The small aircraft can not only take off and land vertically, but are really tough to spot.

Battery-operated drones that have cameras and can be flown for a couple miles at a time cost just a few hundred dollars. McKenzie said adversaries can use them to surveil and target U.S. and partner facilities.

Now, the U.S. needs to defend service members against IEDs that can fly.

“Right now, we’re on the wrong side of the cost imposition curve because this technology favors the attacker — not the defender,” McKenzie said. “But we’re working very hard to fix this.”

U.S. troops have been training to take out drones armed with explosives since Kurdish fighters were killed by a small drone that blew up while they were taking it apart in Iraq in 2015. That was the first time the Islamic State was believed to have killed troops on the battlefield using a drone, The New York Times reported at the time.

Just last month, airmen in Qatar for a training exercise were tasked with grounding a small drone, which they treated like an improvised explosive device.

“Although [unmanned aircraft systems] is a newer threat, the concepts used to mitigate the associated hazards are ones that we are all too familiar with,” Senior Master Sgt. Joseph Leslie, an explosive ordnance device flight superintendent, said in a release about the exercise.

It’s not just land-based troops that are seeing the threat of drones in the region. In 2019, Marines on a Navy warship used an air-defense system on an all-terrain vehicle to take down an Iranian drone targeting troops at sea.

McKenzie on Monday called Iran the most challenging driver of instability in the region.

“For more than 40 years, the Iranian regime has funded and aggressively supported terrorism and terrorist organizations and defied international norms by conducting malign activities which destabilize not only the region but global security and commerce as well,” he said. “Iran is a major source of instability in Iraq, and uses Iraq as a proxy battleground against the United States.”