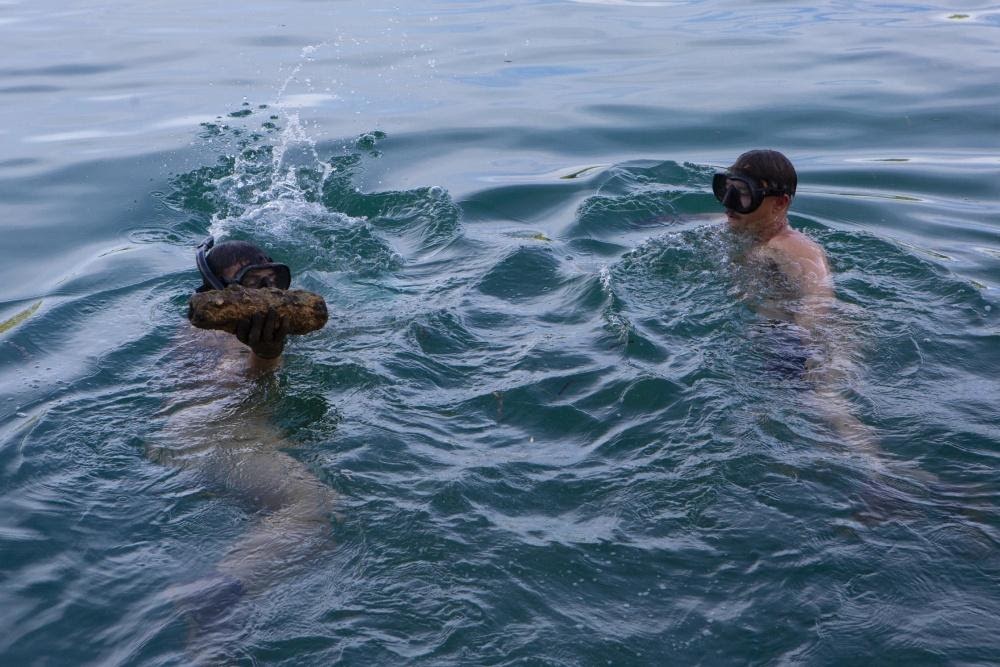 PALAU (Aug. 8, 2020) – The island of Peleliu, Republic of Palau, is a tropical paradise with dense jungles, coral rock beaches, stretching reefs and sandbars just below the surface of the clear turquoise waves. However, encounters with unexploded ordnance from World War II are a fact of life in Peleliu that still endangers the local people. The Marines of Task Force Koa Moana 20, I Marine Expeditionary Force, intend to change that.

A specialized team of Marine explosive ordnance disposal technicians, known as Littoral Explosive Ordnance Neutralization made history July 28, 2020, by successfully locating the first UXO item in real-world operations in a shallow inlet only meters from Kambek, a popular tourist and recreation site in Peleliu.

Despite Peleliu’s scenic island shores and inviting tropical environment, it is also home to one of the most perfectly preserved battle sites of World War II. When U.S. Marines liberated Palau and the surrounding islands from the Empire of Japan in 1944, it took Marines three months to take Peleliu. Many Marines are familiar with Eugene Sledge’s first-hand account of the battle in his book, “With the Old Breed: At Peleliu and Okinawa,” which details some of the ferocious bombardment of the island. To this day, the 5.4 square mile island and surrounding littorals remain heavily saturated with remnants of war and UXO from both militaries.

The LEON Marines fall under the charge of Chief Warrant Officer 2 Jordan J. Torcello, the EOD officer with TF KM20. His team is responsible for locating and identifying potential explosive threats on the island of Peleliu, and for expanding EOD’s capabilities into littoral areas to search for underwater explosive threats in amphibious environments.

“By locating and identifying those threats, potentially dangerous UXO can be avoided and eventually removed,” Torcello said. “Each explosive threat located is a potential life saved.”

Torcello said his Marines deployed specialized equipment and are the first to succeed in detecting underwater UXO outside of a training environment.

“It’s a historic moment,” said Torcello. “The LEON Marines have been training for a long time to do this, and Koa Moana is the first operational deployment of EOD LEON Marines and assets. We’re proving that the concept works, the equipment works and that the Marines’ training works.”

After locating the ordnance underwater, the LEON Marines were able to conduct EOD procedures to safely remove the explosive threat from the water.

“This sets a precedent for future EOD LEON operations in the Indo-Pacific region and validates LEON’s capacity to provide EOD support in littoral environments,” Torcello said. “As we continue our TF KM20 mission, we’ll continue to provide an added measure of safety to the beautiful Palauan waters, strengthening our relationship with our partners in Palau, and reinforcing our commitment to our allies.”

Torcello said as a platoon commander he is proud of the Marines and the work they have done over the past year by diligently becoming familiar with their equipment and practicing their procedures in the water.

“It’s just a very proud feeling to see them succeed,” he said.

Marines and Sailors with TF KM20 are conducting engagements in the Republic of Palau from July through September 2020. Koa Moana, meaning “ocean warrior,” is designed to strengthen and enhance relationships between the U.S. and partner nations/states in the Indo-Pacific region, improve interoperability with local security establishments, and serve as a Humanitarian Assistance Survey Team afloat in support of U.S. Indo-Pacific Command’s strategic and operational objectives. TF KM20 provides a unique opportunity to enhance relationships in the Republic of Palau.