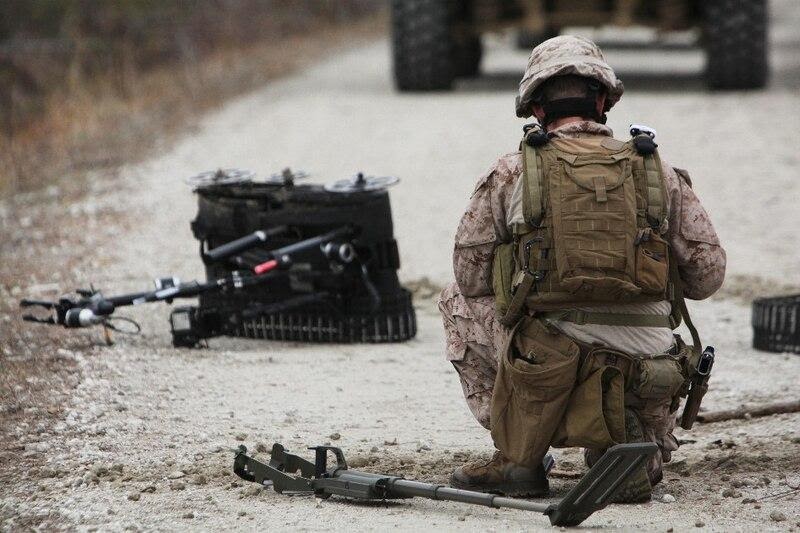 One of the Coolest and Best Jobs in the Marine Corps

This is an excerpt from a commentary by Kevin Wabiszewski, The 12 coolest and best jobs in the Marine Corps (according to Marines), published October 28, 2020, at marinecorpstimes.com.

What they do: This is one job that your parents certainly won’t be happy if you choose, but is extremely important and respected within the Corps.

An explosive ordnance disposal, or EOD, specialist will respond, analyze and neutralize threats caused by explosive devices, chemical threats, biological weapons and radioactive pollutants. This will require the mastery and use of many different pieces of advanced technology such as the bomb diffusing and environmental testing robot called Mini-Andros. Chemicals and technologies that are being used as weapons are constantly adapting and being updated, meaning an EOD Marine must continue to learn and be aware of new technologies in their space.

A successful EOD Marine will spend a majority of their time training and adapting more so than cutting the right wire at the last second. This MOS is not for the faint of heart and this is easily one of the most stressful jobs in the Corps. It takes a special kind of person to choose EOD, but we’re all thankful for them!

How to become one: The path to becoming a 2336 EOD Marine is a rather long one compared to most jobs. Applying to EOD must take place only after serving in the Marines until you have achieved the rank of a corporal.

Once you’ve attained the rank of an E-4, you will be screened in a face-to-face interview by a senior EOD official. Once deemed capable and worthy of the EOD program, a Marine must achieve top tier physical fitness scores as well as top tier ASVAB scoring. Just having decent scores may qualify you but becoming an EOD can be competitive with many Marines falling short despite meeting the minimum physical and Intellectual requirements.

Once your transfer into EOD is accepted you are immediately removed from your unit and re-tasked into a live EOD unit where you will take on a sort of internship role under senior EOD members. This will be your life until a spot becomes open in the 143 day Naval School for Explosive Ordnance Disposal. Even after passing EOD schooling, you will be subject to annual testing and screening to ensure your skills are not only maintained but sharpened and relevant from studying and further EOD related education.

Job outlook after the military: Just like the Marines need disposal of explosive or toxic ordinances, the FBI and many law enforcement agencies also need similar skills and experiences. Those that retire from the Marine Corps as an EOD specialist often tend to end up in some facet of law enforcement or first response where they continue to sharpen and use their skills to ensure the safety of their teammates.

Outside of the obvious government contracting work where EODs are in high demand, there are actually private companies that specialize in the removal of dangerous substances and/or explosives. These companies are called Unexploded Ordnance management firms and often tend to pay experienced EODs very handsomely as they send you around the world to secure dangerous locations.