By Woody EastwoodMay 21, 2022No Comments 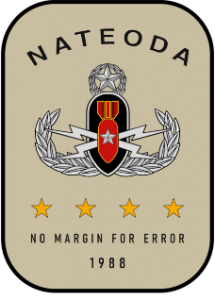 To The EOD Memorial Ceremony and the EOD Ball

The National EOD Commander and his brother Glen

Their visit begins at the Kauffman EOD Training Complex, where they were met and welcomed by the staff and instructors of the NAVSCOLEOD. They had a tour of the facilities and were very impressed by them. It is wonderful to see that our EOD Brotherhood is being carried on by such highly trained professionals of the EOD training facility.

The 2022 EOD Weekend marked the 53rd EOD Memorial Ceremony and the 54th EOD Ball. The EOD community gathered to remember the 343 EOD Warriors who made the final sacrifice while carrying out an EOD mission and to celebrate our multi-service friendships.

On the drive into the memorial, there were signs depicting the names of each of the 343 EOD technicians who gave the ultimate sacrifice in the line of EOD duty and who are enshrined on our Memorial. It was a moving and awesome experience.

At the ceremony, they met many EOD personnel from all our Military Services.

Of major note was meeting Major General Andy V Munera, Commanding General of CBRNE Command. General Munera was very personable and offered to support NATEODA if we need help in locating and contacting Army EOD units. General Munera was invited to visit our website and he was interested.

After the Memorial Ceremony, Jim and Glen attended the 2022 EOD Chef

Cookout / Cook-Off and Family Day. Where a good time was had by all.

In the evening they attended the 54th EOD Memorial Ball

Bob Urian’s company, Wireless Signal Solutions sponsored a table at the Ball and was gracious enough to invite Jim and Glen to their table for the festivities. Bob Urian (NATEODA member) and his wife Gillian were joined at the table by Michael Tavano (Commander, Vietnam Veterans Chapter of NATEODA) and his wife Sonia, a wounded vet Joe and his wife, and a well-decorated Marine EOD Technician.

There was approximately 100 EOD personnel from all services at the Ball.

(I stand corrected: There was approximately 1000 attendees at these events. Thank you Greg K Mittelman for pointing this out.)

It was a moving experience to meet our young and bright young service members, who have carried on the EOD traditions through the years.

One of the highlights of the evening was the cutting of the cake by the youngest and eldest EOD Technicians at the Ball.

The Missing Man Table was moving and impressive.

On behalf of the National EOD Association, I want to thank the incredible EOD Warrior Foundation for organizing these events and the hard work of the foundation and staff.

Below is a photo slide show of the events.

Our National Explosive Ordnance Disposal Association members can rest assured that the traditions of the EOD Brotherhood and solidarity are being carried on with pride and devotion that we knew and cherished.

On this Armed forces day, I salute you all who have served

It has been my pleasure to have served with you!