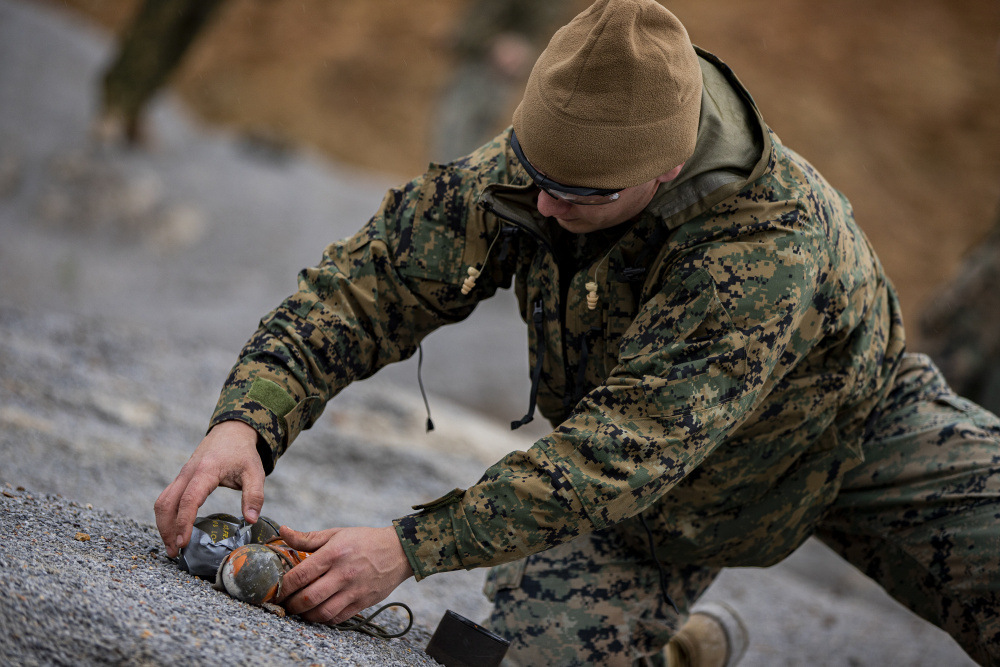 SMUD is a technique used by EOD technicians where they utilize a service weapon to disrupt and neutralize munition from a standoff distance in order to achieve a low-order detonation. The training ensured EOD technicians were proficient in the safe long-distance detonation of explosives, using the M110 – Semi-Automatic Sniper System (SASS).

“We utilize this technique to save time on the rapid clearance of unexploded explosive ordnance,” said Sgt. Julian Mora, an EOD technician with Headquarters and Support Battalion, MCIPAC – MCB Butler, and a native of Kissimmee, Florida. “If an area is very saturated, and we want to reduce the explosive hazards as quickly as possible, we need to be proficient in this procedure to conduct in operational settings.”

It is a very effective technique because by shooting the munition, the munition breaks up and a high order denotation is avoided, explained Mora.

“You do not want it to function as designed so by disrupting it, creating that mechanical breakdown, you are opening up the fragment casing and reducing the explosive hazard and also consuming all the explosive within that munition.” said Mora.

EOD technicians placed hand grenades on the hillside of the range to serve as targets. After placing the M67 hand grenades, the Marines made their way back up range and began familiarizing themselves with the weapon system.

The EOD technicians brought out Marines with H&S Battalion to give them an insight as to how EOD conducts training and stays ready.

“We learned a lot about the difference between high and low order detonations which was really interesting to see the science behind it,” said Lance Cpl. Matthew Juneau, a transmissions systems operator with H&S Battalion and a native of Oconomowoc, Wisconsin. “I am very thankful that I was able to be out here. It is not something I get to do on a daily basis. I really appreciate the EOD guys for letting us join.”

The MCIPAC – MCB Butler EOD team constantly invites Marines from other military occupational specialties out, so they can catch a glimpse of how EOD train and what kind of ranges they conduct.

“It gives them an opportunity to leave their duties for a day, learn about what we do and have fun,” said Mora. “A lot of people do not know the full spectrum of what EOD is capable of doing and our daily duties.”