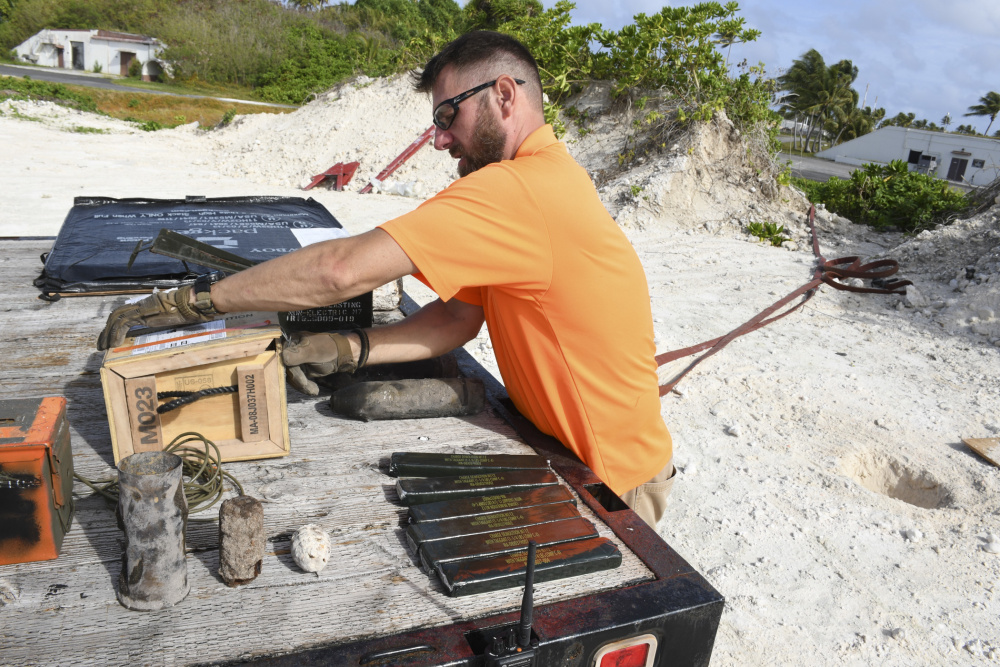 The sun beat down on Kwajalein March 12 as the Explosive Ordnance Disposal truck pulled up to the west end blast site, its Department of Transportation safety placards flipped to orange 1.1, indicating “high explosives on board.” Security personnel and Kwajalein Flight Ops had confirmed the first of multiple safety radius verifications, and it was time for the Kwajalein EOD team to get to work. It was operation day.

Unexploded ordnance is deceptively unassuming. Caked with sand, dirt and more than 75 years of corrosion, WWII-era munitions may appear harmless to the untrained eye. However, UXO should be considered as dangerous as the day it first fired. Until it is dispatched, UXO poses a live threat.

Living and working on a battlefield, Kwajalein community members play an important role in helping EOD act quickly to remove the threat of UXO. Last fall, in less than 24 hours, personnel from San Juan and Parsons Construction reported four pieces of UXO while working at the NAV-AID site near Bucholz Army Airfield. The pieces were verified as safe to move and transported to storage until demolition, according to EOD after-action reports.

On March 12, Hess and Wheeldon laid those same pieces in a row: four iron-brown Japanese Type 94 High-Explosive projectiles each weighing in at more than 13 pounds.

Picture the gun that fired those rounds. Quick to assemble, the Type 94 75mm mountain gun was a weapon commonly encountered by Allied Soldiers late in WWII. Now, imagine what could happen if one of those projectiles was struck by the teeth of a backhoe.

The first task was to truss the UXO in plastic explosive. Hess noted the projectiles were surprisingly well-preserved and made a neat bundle with strips of green duct tape, adding a loop at the top for a handle on the explosive four-pack.

Wheeldon affixed blocks of C-4 and a Japanese Type 89 50mm HE “knee” mortar reported by a Kwaj resident. Once it had fired, the mortar might have traveled 740 yards before its belated recovery.
Hess added a U.S. MKI hand grenade to the first bundle. The last item, a hefty, 55-pound US MK35 5-inch HE projectile found in January, was strapped with three blocks of C-4.

With help from observer Mark McCollum, Hess moved the bundles into two blast pits, both 3-feet deep, dug behind a dirt barrier wall and hundreds of feet away from where the team would pull the fuse igniter. Next, Wheeldon and Hess placed retaining barriers over each pit, and with the help of a hose given by the Kwajalein Fire Department, filled each with 200 gallons of non-potable water.

Hess said the EOD team’s engineering controls are redundant, with water being the key ingredient for achieving the reduced hazard area.
“Water is an amazing medium for slowing down fragmentation,” said Hess. “In our calculations, it knocks the distance the frag travels from 2,500 feet down to less than 350 feet.”

A loop in the detonating cord connects the UXO in their respective holes, Hess said. The detonation would be initiated simultaneously by the shock tube on a 1,000-foot spool. Wheeldon walked the spool from the site to the safe area: an alcove inside a former missile assembly bay surrounded by 22 inches of concrete.

“That calculation is actually pretty conservative,” said Hess, of the frag-to-blast math. “Between being three feet below the surface and the water tamping [the explosion], that pretty much keeps all the frag down. Our calculations only account for the barriers—they do not account for the thick, heavy dirt, as well.”

Now that the blast site was operation-ready, it was time to safely blow it up. Hess placed a GoPro camera near the site to capture blast footage for later analysis. Wheeldon connected the shock tube to a short, green M81 fuse ignitor and looked downrange.

“Immediately after the shot, stay quiet for a little bit so we can hear what’s going on,” Wheeldon said. “Then, you can be excited.”

Wheeldon handed the ignitor to McCollum, who gave the pin a sharp turn and a fierce pull. A sizzle-and-pop whistled through the shock tube at more than 6,500 feet per second—and was gone. If McCollum’s smile was any indication, the careful, pre-blast preparation had paid off.

The ensuing explosion sent an ashen water plume more than 20 feet high in the air. GoPro footage of the operation captured shredded pieces of the water barriers sailing over the retaining wall before gravity did its work and sent the detritus back to the ground.

After a minute of silence—to make sure everything that went up came down, said Hess—the EOD team returned to the site to inspect the craters, retrieve their equipment and clean up any remnants from the blast.

With every operation, Kwajalein Atoll is left a little safer than the EOD team found it.