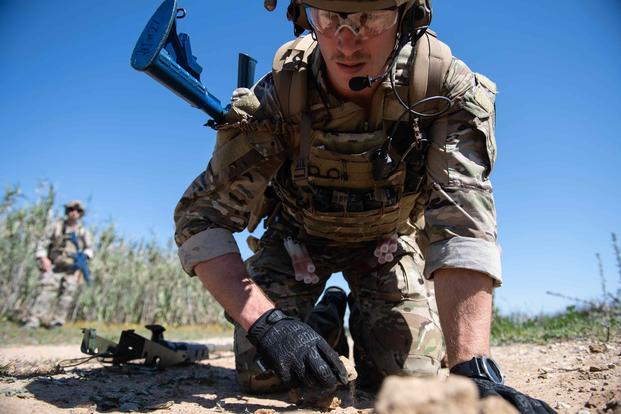 U.S. troops would see a bump in hazardous duty pay next year under the defense budget bill now pending passage in the Senate.

The final version of the fiscal 2021 National Defense Authorization Act contains a provision to boost the maximum amount for hazardous duty incentive pay or imminent danger pay from $250 to $275 a month.

The payout is given on top of base salary for personnel who work in risky jobs, such as explosive ordnance disposal, or serve in locations designated as danger zones.

The change would add up to $300 more per year for service members who qualify for the maximum amount.

The measure was inserted into the bill by Rep. Trent Kelly, R-Miss., a member of the Mississippi Army National Guard who was promoted to major general last week.

“We ask our warfighters to deploy in harm’s way, and this minimal increase is a step in the right direction to show them that we support them as they fight in defense of this nation and our allies while separated from their friends and family,” Kelly said during bill deliberations.

The increase will not apply to those serving in hostile-fire areas, who receive up to $450 per month in additional pay.

The Pentagon can decide whether to provide service members hazardous duty pay on a prorated or monthly basis, the legislation states.

The same bill also contains a provision that would boost pay for sailors and Marines under orders to remain on ship when in their homeports due to COVID-19 risks.

The legislation authorizes the Navy to pay family separation allowance, worth $250 in extra pay each month, for those sequestered on vessels.

Normally, service members become eligible for the allowance 30 days after deploying from their homeports. Pre-deployment quarantines, however, have resulted in sailors and Marines separating from their families before their ships depart.

The 30-day clock will remain in place, but will begin ticking at the start of any pre-deployment quarantine.

The House overwhelmingly approved the defense budget bill Tuesday in a 335-78 vote — a majority that would derail a threatened veto from President Donald Trump. The Senate is expected to vote on the bill Thursday.

Trump has said he will veto any bill that requires the Army to change the names of installations that honor Confederate officers and has made ultimatums over the legislation’s failure to include a repeal of protections for social media companies.

The bill pending passage requires the Defense Department to implement a plan to remove within three years all names, symbols, displays and monuments that honor the Confederate States of America or anyone who voluntarily served for the Confederacy.

To override a veto, more than two-thirds of the House and Senate would need to approve the bill.

From NATEODA editor: The monthly hazardous duty pay for EOD technicians during the Vietnam war was $55 for enlisted, $110 for officers. That would be worth $398 and $796 in 2020.