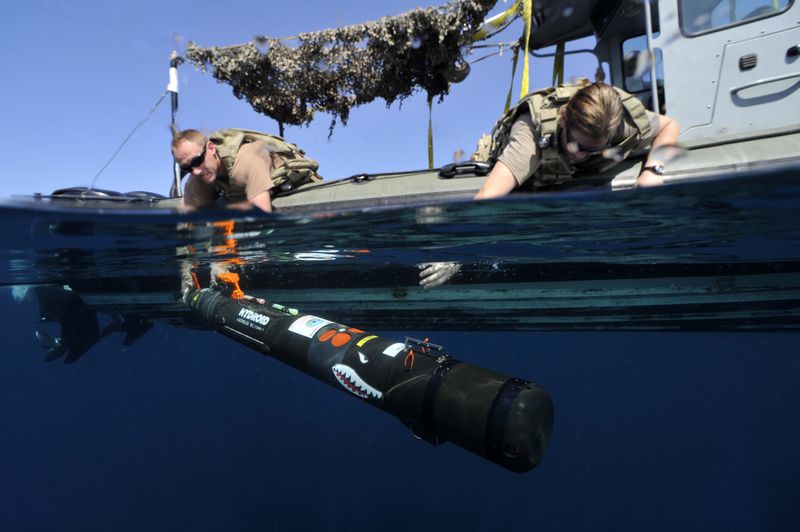 For the Navy sailors who disarm mines and bombs, the learning never stops

This story by Dave Ress was originally published Feb. 20, 2021 at DailyPress.com. Read it here.

“There were no multiple-choice questions. You have to learn the gas laws, and you have to memorize them and then you have to understand why that’s important,” he said.

As the Navy’s EOD sailors move into the new domains sketched in the command’s new 2020-30 Strategic Plan, Jurgens, a 28-year Navy veteran, said he thinks that keeping a focus on learning is going to be a key.

Learning about learning for a Nebraska kid who struggled with Algebra II came in handy when he won a coveted chance to try for an EOD rating, a few years after he joined the Navy.

The first step was dive school, where the learning was very hands on. With that lesson learned, he plunged into the even tougher 1½ years of EOD school. The first test came early. He had to memorize the features, origins and capabilities of 40 different grenades. No homework for this, the documentation was classified. He had just three hours to study before a test the next day that more than 80 percent of candidates failed. He passed.

After years of deploying to Afghanistan and Iraq to support SEAL teams and other special forces, the Navy’s bomb- and mine-disposal units are refocusing on their traditional, underwater domain.

But when EOD leadership talks about new domains, it’s not really about getting wet again, Jurgens said.

Instead, it has more to do with learning his way around the growing number of unmanned underwater vessels that sailors at Joint Expeditionary Base Little Creek are working with these days, as well as the ever-changing and sophisticated ways other navies have of blowing up ships.

One key example of something new to learn comes in the shape of the new Mark 18 Kingfish, a torpedo-shaped drone that can be programmed to operate on its own while it hunts for mines, said Ensign David Bernhardt, a former Navy rescue swimmer. Like Jurgens, he is a member of EOD Group 2 at Little Creek.

It means learning to read hours of video-like displays from a Mark 18 or the other remote-controlled drones EOD sailors operate — “that’s really tedious,” Jurgens interjected, while Bernhardt went on to say it can take months, or even years, to become an expert underwater drone operator and to interpret sonar images to confidently differentiate a mine from, for instance, a discarded water heater on the seabed.

Learning those skills comes after EOD sailors learn to dive — including the laws about gas chemistry that keep them alive underwater — and after they learn to parachute out of planes — sometimes, that’s how they get to where an enemy has planted explosives.

It also comes after learning how to handle nuclear, chemical and biological weapons. “That was like a college-level nuclear physics class crammed into two days,” Jurgens recalls, but it drummed into the sailors how to calculate radiation exposure and assess risk.

“That is what draws EOD techs to get into this crazy job — we’re problem solvers,” Jurgens said.

The skills needed to get to the job — “jumping out of airplanes, sliding down ropes out of helicopters and diving on mixed gases to the bottom of the sea” — are interesting and exciting, he said.

“But at the end of the day, it’s problem solving, whether that’s an IED on the roadside or in a house in Iraq or a mine in the water that’s never been seen before,” he said.

Jurgens, like many of the longest-serving sailors in EOD Group 2, signed up thinking he’d be mainly working underwater. “My generation …. we signed up for the dive,” he said. “And then there was the land war.”

That war meant dealing with IEDs, the quickly-evolving bombs that required EOD sailors to “try to to stay ahead of the enemy, and look for what the next one was,” Jurgens said. “Was it going to be pressure plate, or was it going to be a command wire? Is it going to be remote controlled IED? Our tactics were evolving at light speed.”

It takes plenty of training. Sailors aim to do their jobs by the book, but that’s not always easy for EOD sailors.

“It’s hard to have the book open when you’re 300 feet down by yourself on a rebreather where your only means of communication is a rope tied to you where you can communicate with a sort of pre-coded rope-pulling method,” Bernhardt said.