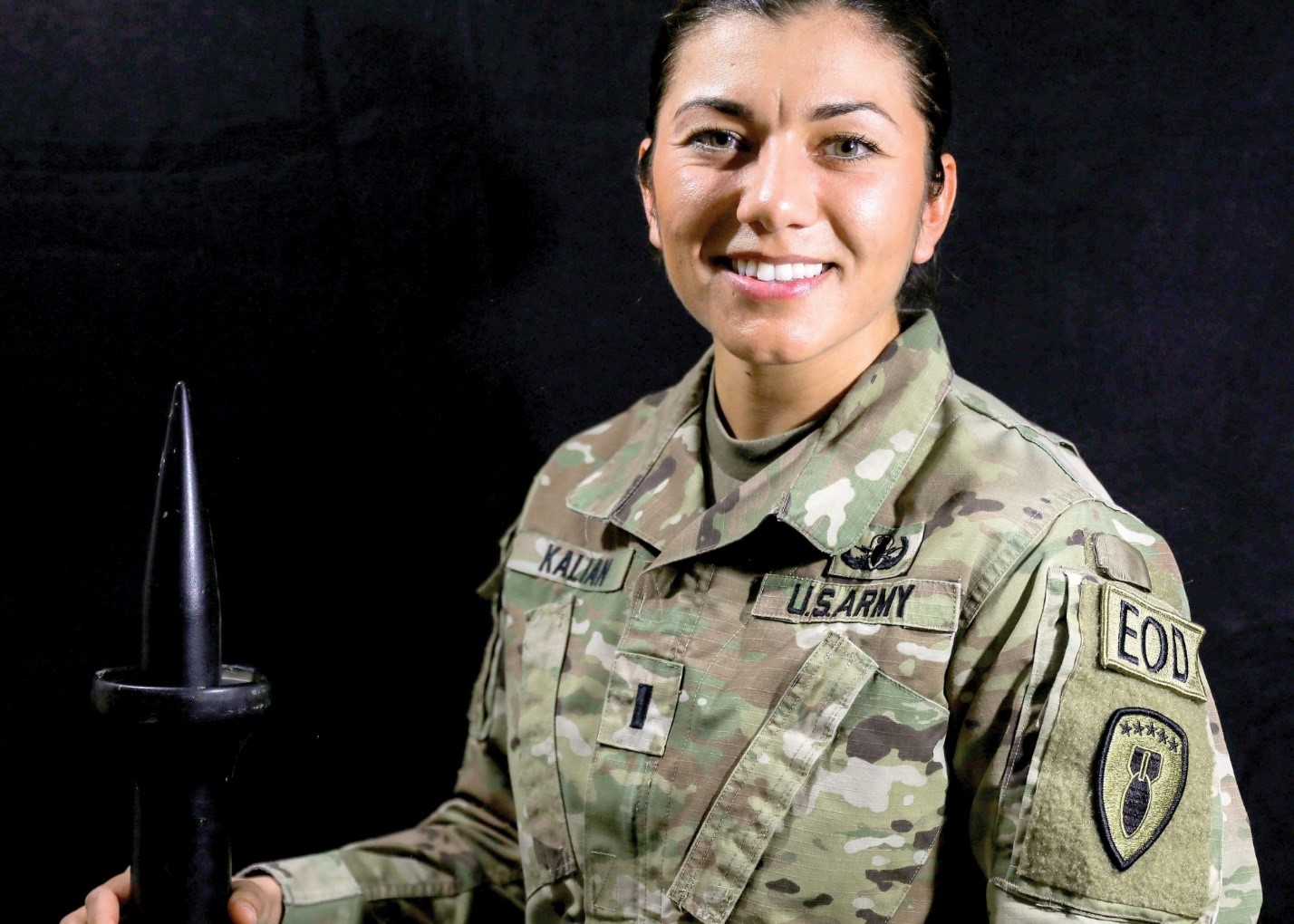 FORT CARSON, Colo. — Improvised explosive devices are one of the leading causes of casualties for the U.S. military since the earliest days of the war on terror.

Soldiers in explosive ordnance disposal (EOD) are tasked with handling and safely disposing of unexploded ordnance, IEDs included. The male-dominated military occupational specialty has a long and rigorous school to become qualified as an EOD technician, with one of the highest attrition rates in the Army.

For 26-year-old 1st Lt. Marae Kalian, EOD officer, 71st Ordnance Group (EOD), overcoming obstacles is not foreign to her. As a new EOD officer at her unit, she looks forward to starting her journey in the dangerous career field.

“I’m really optimistic to finally get a chance to do what I learned all those months in school,” said Kalian.

Journey to the right career

The U.S. Military Academy graduate and native of Blythe, California, always knew she possessed a work ethic and determination. After graduating from Palo Verde High School in 2011, she had hopes of attending a military service academy in her future.

“I was focused on being well-rounded as a student, and I ended up finding out I was going to the Air Force Academy for prep school in December 2010 before I graduated,” said Kalian.

For Kalian, preparatory school wasn’t everything she envisioned it to be.

“When I was at prep school, I was really homesick and didn’t quite understand the bigger picture of things,” Kalian said. “You lose a lot of your privileges and have to earn them back. All the things you value as important when you’re young, aren’t really that important in the grand scheme of things.”

Kalian then made the tough decision to turn down her acceptance to the Air Force Academy from preparatory school. She was accepted into the University of California, Los Angeles, in March 2012.

After spending a year at UCLA, Kalian decided it wasn’t the right path for her.

“UCLA was fun, and I learned a lot, but … the bonds you make are very different compared to civilian friendships,” said Kalian.

After leaving UCLA she worked for a pesticide company, where she decided to apply to several military academies. She endured her second congressional interview to be granted — this time to the Military Academy.

“I really had to fight for myself and explain how I was young and didn’t understand what was in front of me the first time,” said Kalian.

Jimenez and the other panel members gave Kalian another chance. She was granted nomination to the Military Academy, and shortly after was accepted.

She had one more pressing matter before attending the Military Academy.

“I had a high school ROTC instructor who told me I wasn’t going to get into an academy because I’m a woman,” said Kalian. “It was a really good feeling when I went back there for him to sign paperwork after my acceptance to the Military Academy.”

She graduated from the Military Academy May 26, 2018, and became one of 10 cadets to receive ordnance branch with EOD.

It was on the first day of the 37-week EOD school, where she made friends with the only other female in her class, 1st Lt. Hannah Jerome, 716th EOD Company, 725th Brigade Support Battalion (Airborne), 4th Infantry Brigade Combat Team (Airborne), 25th Infantry Division.

“As the only two females in our class, we relied heavily on each other both in and out of training,” Jerome said.

They bonded through their successes and failures throughout school.

“On one particular test day, Kalian and I happened to both fail,” Jerome said. “Without missing a beat, Kalian accepted reality once the results of her test were final. She got down to business, studied hard, and came back the next morning, having let go of the previous day’s failure, (and) focused on the challenge ahead. She passed with flying colors, but used the experience as a learning process to help her succeed throughout the rest of the course.”

Jerome believes Kalian’s confidence in her abilities and resilience make her the type of leader other Soldiers want to follow and emulate.

“She puts her Soldiers first, making sure their needs are met before her own,” Jerome said. “Her selflessness and belief in others contributed to the success of our entire class.” Kalian, now two months with 71st EOD, feels right at home.

“The Soldiers treat me the same as everybody else,” Kalian said. “It’s not like somebody can put on the bomb suit for me, go take my hands, and proceed to do the procedure in my brain. I need to be able to do that by myself. I’m new to the (job), … but I hope they can see I’m willing to learn.”

In one of the most dangerous jobs in the Army, Kalian said she looks forward to tackling any obstacle ahead of her while also leaving a positive footprint.