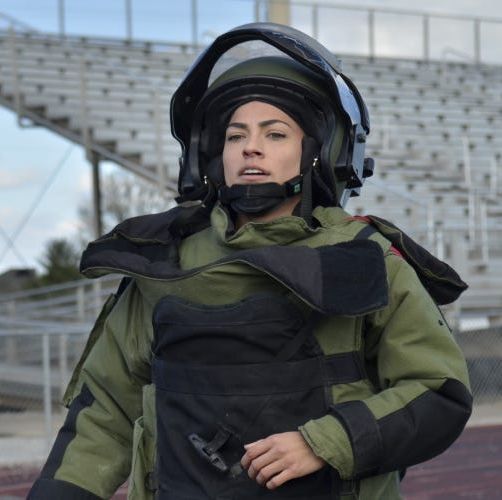 Kaitlyn Hernandez ran a mile in a bomb suit in 10:23, breaking the record set by her friend.

A US Army soldier broke the world record for fastest woman to run a mile in a bomb suit in April, Guinness World Records has announced.

‘As soon as it was done it was kind of a whirlwind, so I didn’t really have a chance to take it in at first,’ she told the Army. ‘But I was very happy and excited. The whole process has just been great.’

Running a mile in a bomb suit is no easy feat. They’re designed to protect the wearer from close-range blasts, resulting in suits that are incredibly heavy, putting wearers ‘at significant risk of thermal strain and decreased work capacity,’ according to a US Army study from 2015. Taken together, Kaitlyn’s suit and helmet weighed 96 pounds. The helmet was the hardest to deal with, she said, although the difficulty was mostly mental.

‘It’s usually a split-second, any time I run and start feeling sorry for myself I just have to get over it and say it’s not that bad.’

Kaitlyn had already beaten Ashley Sorenson’s previous record unofficially while training but still knew she had to be prepared for anything:

‘It’s like any time you go to work out,’ she said. ‘Sometimes you’re feeling really great, and sometimes it punches you in the face. Windy days are pretty rough too, when you hit a headwind it feels like you’re running in mud.’

According to Guinness World Records, the fastest mile in a bomb disposal suit was set by Mark Gibbs in Perth, Scotland, in 2017, with a time of 7:24. Meanwhile Iain Church set the record for the fastest marathon in a bomb suit at the 2015 London Marathon, running a 6:28.