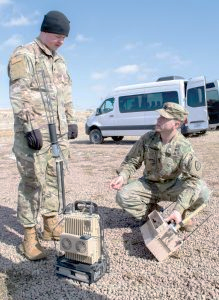 “They actually got to see exactly what happens when you turn on your system,” said Capt. Steven White, electronic warfare officer, 71st EOD. “This is exactly what happens against each specific radio-controlled improvised explosive device (RCIED). They can build confidence in their systems, and know 100 percent if they turn on their systems it will defeat these RCIEDs.”

“These systems are like manpack radio systems that any Soldier going out on patrol should have,” said Staff Sgt. Abdiel Mata, electronic warfare NCO, 71st EOD.

An important aspect of the training was bringing outside units and services to Fort Carson to enhance interoperability between various military branches.

White said it’s important to work with various branches to understand tactics, techniques and procedures in order to work well on missions together.

The RCIED countermeasure equipment training proved to be beneficial for the trainees.

“I had seen (RCIED equipment) at EOD school, but this is the first time I have seen them turned on, working and seeing what they actually do,” said Marae Kalian, EOD technician, 764th Ordnance Company, 71st EOD. “We need to understand the way they function … in order to get the maximum result we are looking for.”

Lessons learned from the course were not meant to make the trainees’ expert electronic warfare officers, but instead, introduce the ideas and concepts of electronic countermeasures (ECM).

Mata said getting hands on the equipment is the most important part — knowing how it works and how to test it are imperative.