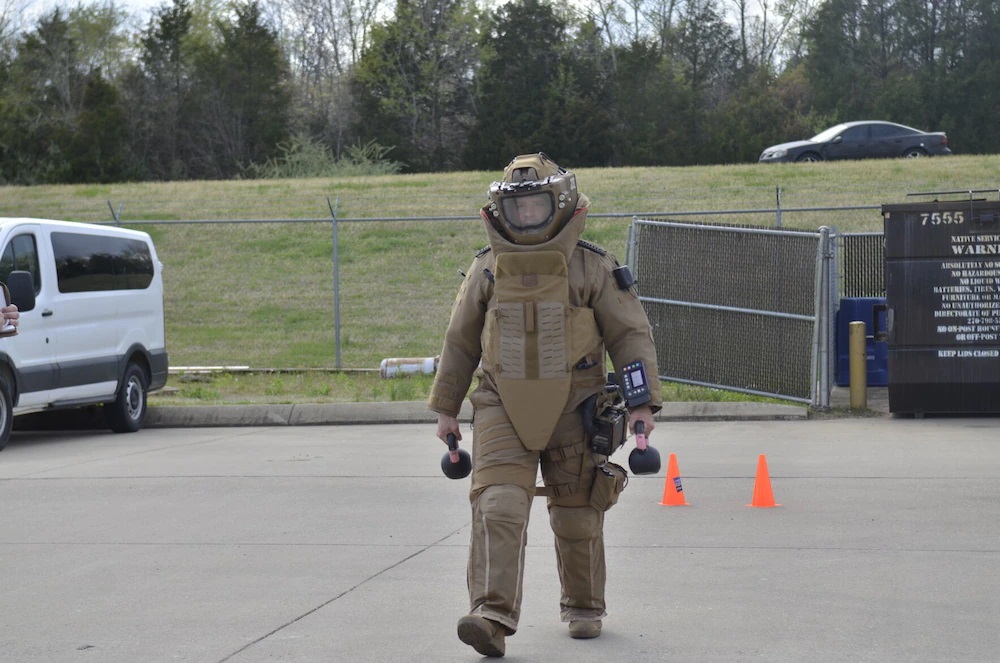 FORT CAMPBELL, Ky. – Explosive Ordnance Disposal, or EOD, Soldiers put their lives on the line when-ever they’re called into action, and their protective equipment can mean the difference between life and death.

Fort Campbell’s 52nd Ordnance Group (Explosive Ordnance Disposal) is playing a major role in pushing that equipment forward as the first unit to test the Next Generation Advanced Bomb Suit, or NGABS, the latest development in Army bomb suit technology.

“We got a lot of receptive feedback from the Soldiers, and they were very thorough,” said Sgt. 1st Class Jeremy Jordan, 184th Ordnance Battalion, 52nd EOD. “

“They understand it’s the next generation of bomb suit that we’re going to be using … (and) we can make sure we have a good suit that’s fielded to us, and in turn support the Army and local authorities through our mission,” he said.

The NGABS provides increased mobility, 360-degree ballistic protection, weight reductions and a modular sensor suite that provides low light and thermal capability. All of these are improvements when compared to the existing advanced bomb suit, or ABS. Through human factors evaluation, or HFE, 52nd EOD evaluated the improvements through a series of operationally relevant training exercises.

“The engineers who are designing this suit are actually listening to our feedback and care about what we have to say,” said Sgt. 1st Class Eric Thom, 717th Ordnance Company, 184th Ordnance Battalion, 52nd EOD. “During the first round, there were a lot of negatives about the suit that they changed for the better, and I think it just needs a few more tweaks in the design, comfort and mobility.”

Thom said the suit’s mobility in certain areas and the addition of ballistic protection stood out as strong points, but he recommends improvements to its fitting and sensor systems.

“On a personal level, this is something I feel that I can contribute to fostering the career field and the equipment the guys that are following me will be able to use,” he said. “If I can help them get better equipment, that’s a huge part of what being EOD is – not just to protect myself, but to leave some-thing to protect future EOD techs.”

Fort Campbell also brought in Soldiers from other installations to effectively test how the NGABS functions for women because 52nd EOD is predominantly male.

“This has been a huge opportunity,” said Staff Sgt. Dione Brown, 55th Ordnance Company EOD, Fort Belvoir, Virginia. “Giving valuable input to a system that’s probably still going to be used 10 years down the line by techs that follow behind me is a big deal, and I feel very fortunate to be part of the process.”

Brown said the NGABS is a marked improvement over the ABS and could save time across the Army once it is fielded to active-duty Soldiers.

“The mobility, range of motion and the modular system are huge improvements over the suit we have right now,” she said. “The biggest thing is the range of motion – allowing us to do a job quickly with little impediment to our movement means we’ll be able to neutralize our target faster, get in and get out.”

Bond said the HFE was a success and provided PEO Soldier with valuable input on the suit’s strengths and weaknesses.

“These are EOD technicians, so it’s very important that we have the actual user’s feedback as we’re developing this capability,” he said. “We’ll take that feedback and make necessary design changes prior to the next HFE.”

Jordan said 52nd EOD is expected to conduct another HFE this fall, and the Soldiers look forward to helping make the NGABS the best it can be.

“I’ve been in the Army for 18 years, so I probably won’t see this suit fielded until right as I’m getting out,” he said. “But it feels good to do my part in helping it come together. And all the Soldiers, whether they know it or not, they’re helping to shape the future of EOD.”